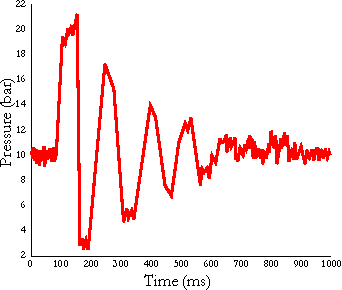 Pressure peaks in a hydraulic system can break your pressure sensor and the costs can far exceed the price of a pressure snubber but when should you use them?

Sometimes a small oversight like a sudden valve operation can cascade to larger problems, creating pump ripple or fluid hammer. These problems affect your pressure sensor causing noisy signals, lowering cycle life or resulting in catastrophic failure. All these headaches and unforeseen costs can be avoided with a simple snubber which limits the amplitude of pressure transients.

Pressure transients can be observed daily in our plumbing fixtures. Shutting off a shower too quickly can cause an audible bang, a symptom of fluid (water) hammer. This occurs when there is a sudden change in the rate of flow of a fluid, usually caused by a pump or valve operation. The sudden change in flow, or momentum, of a moving fluid, causes a pressure build-up that travels as a wave through the piping, causing piping to vibrate and possibly destroying sensitive components.

A standard approximation used to calculate the pressure transient is the Joukowsky equation. This formula determines the pressure change as a result of a change in fluid velocity.

ΔP= -ρ√(K/ρ) ΔV
Where ΔP is the pressure change (sometimes called surge), ρ is the fluid density, √(K/ρ) is a conservative calculation of wave speed, K is the bulk modulus of the fluid and ΔV is the change in fluid velocity.

For example, there is a hydraulic system that has sensors before and after a valve, see Figure 1. The system is running at 10 bar and has a flow rate of 3.6 lpm before the valve suddenly closes causing a pressure wave of 11.2 bar to propagate through the system. This pressure wave will propagate through the system until the energy is completely dissipated.

To understand how pressure transients can damage your pressure sensor it requires an understanding of the core of a pressure sensor. A pressure sensor is composed of a sensing element that is designed for the pressure range chosen. The sensing element is commonly made with a strain gauge that is placed upon a thin sensitive diaphragm. The diaphragm design is a compromise between sensitivity and safety factor; it can elastically deform at its rated capacity with a high degree of sensitivity, but it has the tradeoff that if the stress greatly exceeds its rated capacity it will plastically deform or rupture. When manufacturers test pressure sensors for overload pressure ratings, it is generally done quasi-statically as most pressure sensors are quasi-static measurement devices. But pressure transients are not static and can cause failure even at pressures below the overload pressure rating. To mitigate this issue a snubber can reduce the dynamic pressures that a sensor experiences during pressure transients.

A pressure snubber is a fitting that is either integrated into the pressure sensor, for a small profile, or an external component. It is designed to limit the rate of change of pressure by restricting the fluid flow through the fitting. As the fluid flow is limited, the sudden rise in pressure is delayed downstream as the fluid needs time to pass through the restriction. This feature allows pressure spikes to be filtered out but quasi-static pressure changes will pass through.

As shown in Figure 1, a snubber effectively suppresses the pressure peaks from passing through the fitting. After the valve closes, the pressure rise in Sensor C, see Figure 1, is limited and the sensor is exposed to lower dynamic pressures. On the other side, the pressure drop in Sensor D is slowed and the internal cavity pressure does not drop below the vapour pressure, which means that harmful cavitation does not destroy the sensor. As an added benefit, these sensors are exposed to a smaller stress amplitude and it will take longer before they experience fatigue failure. The only drawback of a snubber is that by its function it slows down the mechanical response time of the pressure sensor so it should not be used for capturing dynamic pressures.

While the above example shows a simple hydraulic system, more complex systems, particularly those that have multiple branches, are harder to determine when a fluid hammer will happen or the magnitude of it. There is pressure transient simulation software for complex systems but the resources associated with this analysis may not be cost-effective. Due to the complexity associated with most systems and the costs associated with component failure, it is generally better to preemptively install a snubber than risk the chance of system downtime. The bottom line, your pressure sensor will last longer with one than without one.

Please fill out information below and click "Submit"
Fields with (*) are required.

* - All fields must be filled